This page was last updated in June 2019

Metabolism is the rate at which a person’s body burns down calories into energy. Metabolism speed for each individual depends upon a lot of factors such as genetics, sex, age, body fat, activity level, and muscle mass. The process of burning calories into energy keeps on happening every second even when we are sleeping.

The food that we eat is broken down into protein, carbohydrates, and ​b, and the calories in these are converted into energy and the rest is stored as fat. We have no control over the genetic factor of metabolism, but we can find ways to increase the rate at which calories are processed in the body so that more fat can be burned.

#2, How Can Metabolism Be Boosted? 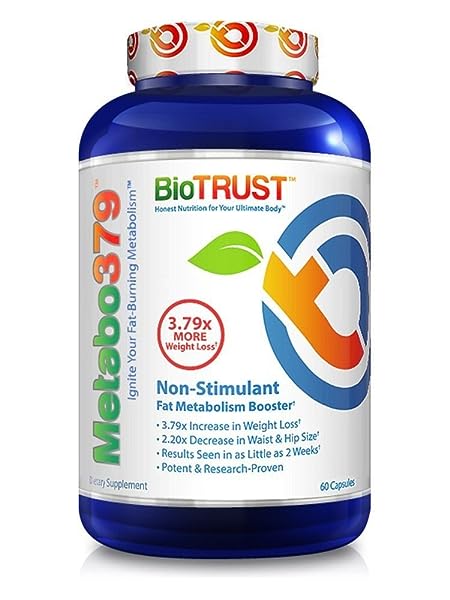 Metabolism booster supplements are diet pills which can be helpful in the process of fat burning. Metabo379 is a naturally derived capsule, which metabolizes fat. The speed of metabolism is claimed to be increased so that the body starts to work more efficiently to burn off the extra stored fat in the body. As advertised, research has been quoted to report that Metabo379 can encourage the body metabolism to work faster by 3.79 times, thus aiding weight loss.

Metabo379 is a metabolism booster product from BioTrust made completely with natural ingredients and is free from gluten, wheat, dairy, soy, fish, egg, shellfish, peanuts, and tree nuts. No sugar, artificial sweeteners, colors, flavors, GMO ingredients, or preservatives are added. It does not consist of caffeine or any other stimulants, but only branded supplements.

#4, What Are The Major Ingredients Of Metabo379?

This is known as the East Indian Globe Thistle and is found in Northern Australia and the Himalayas in India. The extract is used in Indian herbal and Ayurvedic Treatment and is used to treat an array of disorders. More clinical and scientific research is still needed before its medicinal use can be accepted in western medicine.

This is better known as Mangosteen, which is a fruit traditionally used to treat many ailments. Not enough scientific study is available to verify how effective it actually is.

Piper Nigrum or black pepper, a common spice is an active compound which can modify the body’s metabolism by increasing the rate of absorption. It also increases the absorption of vitamins A, C, and B-6.

The SigmaLean complex which is used in Metabo379 by BioTrust comprises a blend of rind extract from Mangosteen and the flower-head extract of East Indian Globe Thistle.

Weight Loss improvement by 3.79 times
Decrease in the hip and waist size by 2.2 times
Results evident as early as 2 weeks itself

Metabo379 is supposed to jumpstart the process of metabolism and eliminate fat by attacking it at the cellular level. The Metabo379 ingredients do not contain any stimulants, but only natural ingredients, which give amazing results by increasing fat burning and decreasing the fat storage ability of the body. The solubility of the nutrients in fat is increased by up to 60% by the ingredient Bioperine.

This novel formulation which is purely herbal has been subjected to a clinical study on 100 people to determine its effectiveness in weight loss. The extract of Sphaeranthus Indicus flowers and the rind of fruit Garcinia Mangostana were combined in the ratio 3:1, and 400 mg mixture was tested on the subjects half an hour before breakfast and half an hour before dinner for eight weeks.

Along with balanced meals, this blend provided positive and significant effect on the subjects with regard to body weight, body mass index, and waist circumference. This is reported as much more than what could be achieved through healthy diet and exercise alone.

BioTrust claims that when you use Metabo379, SigmaLean complex, the mainly active ingredient limits the creation of new fat cells, inhibiting their growth, thus stimulating them to breakdown.